The Official Forums of the Furry Experience comic!

For no particular reason other than sating my own pointless desire, I figured I'd ask some questions relating to people's fursonas. Simple things like...

What animal do you identify with?
How long have you had this 'sona?
Is it your first? If so, are you likely to ever change it?
How and/or why did you choose it?

Obviously you'll have to have a 'sona to be able to answer these and there are a number of people I know of who don't actually have one despite being familiar with the fandom. If this is the case, is there any particular reason? (Jolly Jack, for example, adamantly denies being a furry despite the ever growing mountain of evidence that is his art

Anyways, I'll go first.
What animal do you identify with?
I most closely identify with Canis Latrans, the American Coyote. It is from this Latin name that I have taken mine: Latrans Thatcher. While I adore dragons and they are probably my all-time favorite animal, I do not identify with them as closely as I do with the coyote.

How long have you had this 'sona?
I have since lost the MSN Messenger history in which I openly proclaimed to my friend who'd introduced me to the fandom that I'd chosen one, but I do still have the email I sent a couple weeks later. That happened to be on 08 June 2008.

Is it your first? If so, are you likely to ever change it?
Yes, this is my first 'sona. While there have been some very minor tweaks to the character over the years, I do not believe there has been any significant changes, nor am I likely to ever take on a different one. Why? Because I feel that the mythos of coyotes fits me better than any other I've ever run across. They're known as tricksters and perpetrators of Laser Guided Karma. A trademark of the coyote is their ability to change, adapt and survive even in rapidly changing and often hostile conditions. These are all things that, time and again, have proven true in my life.

How and/or why did you choose it?
There's actually a LONG history to my 'sona that actually stretches years prior to my introduction to the fandom. First was the name. Back in 2001 (holy crap, over ten years ago

) there was a couple months I would occasionally stop by some Yahoo Chat rooms dedicated to Paragraph RP. I played the roll of a monk named Ancalagon Thatcher. I've used 'Thatcher' as a last name for every RP that I played characters that were essentially 'me' in a different setting. Next would come the 'coyote' bit. Back when Halo was first released for PC, I had a different animal name for a profile set on each difficulty setting. I happened to be on the 'Coyote' one when someone asked me to join their Clan. It was then that I started using 'Coyote' as my online handle pretty much everywhere. Unfortunately, 'Coyote' is a lot more common than you might think, which brings us back to the name. I began using 'Latrans' particularly where 'Coyote' had already been taken. Keep in mind, all of this is taking place before I'd ever even heard of 'furry'. Enter an online friend I'd known since shortly after I dropped Yahoo Chat RPs. He came out to me as a fur and introduced me to the fandom. From there the pieces kind of just fell into place. In a sense, I didn't choose to be a coyote nearly so much as being a coyote just crept up, tackled me and said 'Guess what!'

That... turned out a little longer than I intended.

Latrans wrote:What animal do you identify with?

Latrans wrote:How long have you had this 'sona?

Around 1998-9, when I first discovered the internet in my office

Latrans wrote:Is it your first? If so, are you likely to ever change it?

Well, a long while before then I tried to identify with Canis lupus, the wolf, because I had written, by hand, a fanfic that involved a Hulk-type character who was in the form of a wolf. I don't think he was my actual fursona, but I did like wolves quite a bit.

Latrans wrote:How and/or why did you choose it?

It seemed that everyone I met on line was a wolf or canine in general, but I wanted to try something different. Then, I remembered a game we played in the Youth Group of our church, which was supposed to help us memorize each other's name: you say your first name, and then the name of an animal that starts with the same letter as your first name.

I was among the first to choose, so I chose "jaguar", mainly because there aren't that many animals whose name starts with "J" in Spanish

So, I formed this character, named him "The J.A.M.", originally those are my initials, but later on a student of mine suggested that they should stand for "Jaguar Amorosamente Mexicano", "lovingly Mexican jaguar", and they do so now.

He was created mostly for the Tiny Toons Adventures fanfic community, and a few years later, I asked a few artists to help out with the actual design (as I can't draw to save my life).

The "warping" abilities stem from the fact that I can enter and leave places completely unnoticed, sometimes involuntarily. Jaguars are also good at sneaking around to catch their prey.

To see what he looks like, go to iamthejam.deviantart.com

To read about the adventures of the jaguar, my fanfics are on the link below my avatar

What animal do you identify with?
I think the best representation of my personality would be an otter: just a little bit of everything, but perhaps, a little bit of a loner at times. I enjoy good company often.
How long have you had this 'sona?
I've had several throughout this last while. This most recent one (the grey wolf here) I've had for about 3 years.
Is it your first? If so, are you likely to ever change it?
I'm already in the process of changing over to a secretary bird (it's a little more appropriate for my name/title), but I will still keep the other one.
How and/or why did you choose it?
I was introduced to the fandom that way. I first was interested in werewolves and would imagine what it would be like to look that way (Morrowind's Blood Moon had a little something to do with it). One link leads to another and I found lots of work by Christi Granjean (aka Goldenwolfen) on Deviantart. From there I decided to Pick a Fursona of my own (based off of the drawing that my friend Jessica made for me, the one you see today). 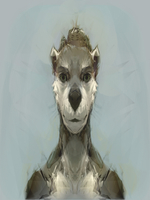 Jamei Lu Ri
What animal do you identify with?
Kitty!
How long have you had this 'sona?
March 1994, retired in january 1997
Is it your first? If so, are you likely to ever change it?
Yes, I did.
How and/or why did you choose it?
After inspiration of reading goosebumps Werewolf in fever swamp, and Why I'm afraid of bees, The island of DR Moreau, and several books about occults; I thought of the idea of a genetically altered species of alien with appearances akin to felines and how cool it would be to play..

Ember the Margay
What animal do you identify with?
Kitties! Margays were once kept as housecats, deforestation of their natural habitate and their reluctancy to breed in captivity made it extinct in the US.
How long have you had this 'sona?
January 1997-january 2005
Is it your first? If so, are you likely to ever change it?
Its the second mane character incarnation of my main, Now a terrestrial feline with a affinity for rave music and being a elemental slinger of magic.
How and/or why did you choose it?
It catered to my intersts better.

I left the fandom breifly while I focused on my vocational schooling and began a long journey of self discovery.

Samantha Indigo
What animal do you identify with?
Skunks
How long have you had this 'sona?
since august of 2006
Is it your first? If so, are you likely to ever change it?
Its my 3rd main character incarnation, Samantha was officially retired as my main in october of 2011
How and/or why did you choose it?
Cause it was a fun character concept, a lot of people seemed to enjoy a demonic lecherous skunkette with a taste for souls and committing random acts of evil. She was implemented in many midevil RP places.

Samuel Indigo
What animal do you identify with?
Skunk
How long have you had this 'sona?
Since 2007 to current
Is it your first? If so, are you likely to ever change it?
Nope, its my 1st RL incarnation of myself as a animal. Often used in Semi-rp or to create comedy schtick with Samantha.
How and/or why did you choose it?
I empathize with skunks a lot in behavior. I just found it very fitting.

Stormy_Weather
What animal do you identify with?
Skunk, but playing a pastel coloured winged dimunitive flying equine would be a nice change.
How long have you had this 'sona?
Concept went into fruition feb 2011 and active RP status in Sept 2011
Is it your first? If so, are you likely to ever change it?
Its a 5th main character incarnation.
How and/or why did you choose it?
Its a polar opposite to Samantha, Responsible, quiet, talented, kind and sweet. It was a nice change and I like playing it now that there's a large supporting community behind MLP versus when I first took interest back in feb 2011